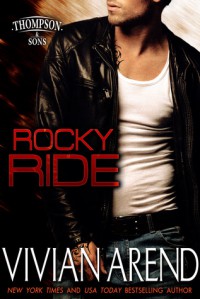 I didn't relate to the hero, Mitch, or heroine, Anna, very much, but liked them enough.  Mitch looks like a bad boy, but apparently isn't as "bad" as people think.  Anna is straight-laced with a hidden wild side that Mitch brings out (she's a cop and he's a mechanic).  They have dirty sex only.  Then Mitch decides he wants more.  So, they start to go for more with dates and public outings.  At about the 49% mark, they decide to visit with another couple.  Technically, 2 out of 3 partners in a "trio", I guess (from another series by this author, I think).  For the purpose of having voyeur sex.  The third partner isn't welcome because he's apparently a relation of Anna's and that would just be too awkward (ya think??!!).  Okay.  Whatever.  Not really my thing.  And it wasn't that big of thing in the book, either - they mostly ignored the other couple.  So why even have it?  Then Anna's partner, Nick, does a bad thing and Mitch decides he and Anna need to take a break so that his bad boy image doesn't impact her career.  She goes along with it because of some reasons that make no sense.  Two days later, Nick shows up the bar that Anna is frequenting with her family and some blonde biker chick is all over him.  His relationship with her is explained, but not in a satisfactory manner.  The relationship he is described to have with her would not include her being in close physical contact with him, so that whole thing was bullshit, but Anna accepted it.  The whole break in the relationship was bullshit, too.

I started out liking this and was hoping I'd found a new author, but I'm not really in to menage or any kind of multiple partners/group sex and I suspect some of this author's works might fall in to that category.  I was also disappointed in the "conflict" Nick caused - it seemed flimsy, at best.  So, I probably will not continue the series.