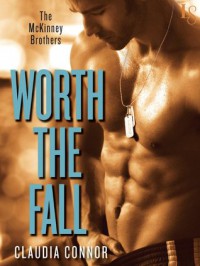 Abby is a widow.  Her husband died six months previously in a plane crash.  She has four children and is pregnant with a fifth.  She's taken her kids on vacation to the beach.  Matt is a Navy SEAL.  He's served for about twelve years.  He's on leave and has driven his cousin to the beach for his cousin to meet a woman and her friend.  Matt meets one of Abby's kids, Jack, on the beach one day and ends up hanging out with them.  He ends up spending the rest of his leave hanging out with them.  Abby thought they would say goodbye at the end of the vacation and that would be it, but Matt keeps in touch.

I enjoyed this a lot.  There were a lot of feels.  I felt weepy in a few places and it's been quite some time since a book caused me to have that reaction.

I'm usually not crazy about stories that have kids.  I feel like the kids are just there for the cuteness factor and they're mostly silent and unbelievable well behaved and undemanding until the author needs them to progress the story.  This story was not like that.  The kids were front and center a lot.  Matt loved them and spent plenty of time with them.

I did find it convenient that money was never a problem for Abby.  She was not close with her husband, Josh.  She didn't seem to be hurting much that he'd died.  She commented that she never really felt like she'd been married.  He was some type of lawyer and was married to his job.  He wasn't home often, didn't spend time with his kids and didn't know Abby was pregnant with their fifth child at the time he died.  So, I guess, given Josh's job, his death left Abby with a lot of money.  So, money was never a problem.  Abby didn't work.  There was never any stress with work, child care, taking care of the kids, etc.  So, that was VERY convenient.  But, Abby and Matt's story was really nice.