What the Librarian Did 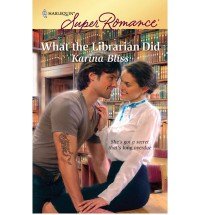 I enjoyed this a good bit.  Devin, the hero, is a retired rock star.  It's a forced retirement because he's damaged his organs with alcohol so much the doctor told him another drink will kill him.  He's decided to leave the L.A. music scene and return home to New Zealand to attend school and be near his mother (who recently suffered heart problems).  Devin is not quite a part of the normal world.  He's used to fan adoration.  He longs to be unrecognized, but doesn't really know what to do when someone treats him like any random normal person.  Rachel, the heroine, is a librarian.  She seems repressed and rather stodgy. I really don't think she is.  I think she makes herself emotionally unavailable in an effort to protect herself.  I also think she is very aware of all the various vices in the world and clearly sees their potential for damage.  Anyway, she has no idea who Devin is and it's quite refreshing.  I found the dialog witty and sarcastic.  I enjoyed seeing them meet and develop feelings for each other.  There was one sex scene and it was rather short and non-descriptive.  The only complaint I really have is that it wasn't a very happy story overall.  There was character development and pretty reasonable behavior between the characters, but they didn't share many happy times.  There was mostly tension, conflict or suspicion of ulterior motives.  It might have been nice to have an extended ending - a way to experience the characters sharing happier times.