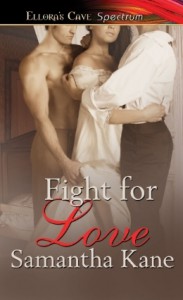 I've never read anything by this author before and I'm not sure how I came by this book.  I suspect it might've been free on aRe.  Anyway, I found it on my Kindle and gave it a shot.  It's book 12 in a series and from reading it, it would seem all the other books are about menage relationships, too.  I've read menage before, but I don't generally go looking for it.  Usually, it makes me a bit uncomfortable, especially if it's a long term relationship for the three people.  I don't see how everyone can feel equal and secure, but those are probably my own insecurities coming through.  Either way, this really did not do it for me at all.  The characters were very one dimensional.  They are already fascinated or in love with each other, so you're thrown in to the relationship without really seeing it grow.  The heroes are described one way, but come off as the opposite in some instances.  Thom, the doctor, who is drunk and fucking his patients turns out to be pretty inexperienced when it's all said and done.  And that just seems impossible when it's described that he's "fucked" at least five times in one day - men and women.  Devlin is the mob guy and seems like the most appealing hero, but he's all talk.  The heroine is forth-right about sex and that seems to be about all she has going for her.  Mostly, she just seems a bit selfish.

This was just okay for me.  I won't look for any other books in the series.