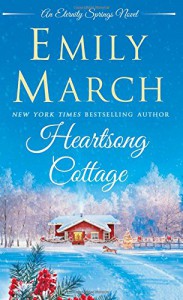 I've never read anything else by this author, but this looked like it could be interesting, so I gave it a try.  It turns out that it is not my speed at all. It started out fine.  It opens in the past with the worst day of Daniel's life.  He is a cop and he's just been shot while pursing a suspect.  He's okay thanks for his Kevlar jacket.  His wife, Gail, calls him in a panic saying their son has been kidnapped.  Then it's 10 years later.  It turns out Daniel's son was killed by a child predator and his body left in a pumpkin field.  Gail then commits suicide.  Daniel is now a private investigator specializing in locating missing children.

Shannon lives in Eternity Spring, Colorado and runs the local bar.  She also does house flipping.  And she's an aspiring writer.  I can't remember what else she does, but she's very busy.  She's actually not who she says she is.  She's on the run from someone from her college days.  She's assumed someone else's identity.  But she has lots of friends in Eternity Springs and is practically a pillar of the community!

Daniel and Shannon meet when Daniel visits for a mutual friend's wedding. They drink too much and have a one night stand.  It gets crazy from there...

Dog lost for 10 years shows up