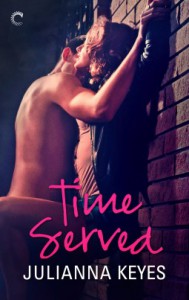 I'd never read this author before this book, but it was on sale for $.99 and I'm always looking for new authors, so I gave it a try. I was not disappointed.

The basic plot is not unexpected. Rachel and Dean were girlfriend/boyfriend in high school. Right up until Rachel disappeared in the middle of the night. She'd received a scholarship and suddenly was given money by her mother who told her to pack up her stuff, go to college and never come back. She does that. She never explains to Dean. Three weeks later, Dean commits armed robbery with two of his friends.

So, 10 years later, Rachel is a lawyer in Chicago at a prestigious law firm and has just about everything she's worked toward. Dean is an ex-convict living in a town outside Chicago where Rachel is interviewing residents for a class action lawsuit her law firm is handling. Dean and Rachel run in to each other at a store/restaurant in the small town when Rachel is buying empanadas for her law partner, their driver and herself. Dean has a LOT of rage toward Rachel, but he's still very much attracted to her. Rachel is still attracted to Dean and she feels very guilty about how she left him.

They both grow quite a bit throughout the story. The things that happen are not unexpected and it's not as drama-filled as I expected, which was nice. It was refreshing to see an ex-convict character that actually earned his time by doing a very bad thing because he was greedy/lazy/made a very bad decision rather than an ex-convict who is made to be sympathetic by doing a very bad thing but for all the "right" reasons. Dean is not very nice to Rachel for a good bit of the book. It's obvious that he does care about her, but he is VERY angry at her for the hurt she caused him. Rachel feels very guilty about her previous treatment of Dean and she apologizes many times and tries to give him the closure he needs, but she is not a doormat.

This author's writing reminds me of Cara McKenna (that's a compliment, in my book).