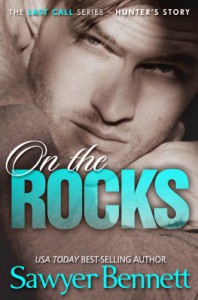 I enjoyed this. It's sort of a best friend's older brother crush trope.

Gabby is best friend's with Casey and has a crush on Casey's older brother, Hunter. On the night of Gabby's high school graduation, while celebrating, she kisses Hunter. And he kisses her back. Then completely breaks her heart with his reaction - he pushes her away, wipes his mouth and then lets it be known he's meeting up with someone else.

Five years later, Hunter is back in town after being a big shot surfer. He's been back in those five years, but he's now "retired" from the surfing circuit and has bought a bar. He's really returned because his twin brother, Brody, has just been released from prison and he wants to be there for him. Gabby has sniped at Hunter every time she's seen him in those five years as a way to protect herself. She was/is very hurt by his reaction to her kiss, but still cares for him. She keeps him at a distance by being not so nice. But, now Hunter needs work done on the bar he just bought and Gabby is running her deceased father's renovation business. Gabby needs the work, so she bids on Hunter's project.

Hunter does all of the right things concerning Gabby. I think he more than makes up for his reaction to Gabby all those years ago. He's totally in to her. He does everything to ease her insecurities. And I liked Gabby and could sympathize with her insecurities.

Some of the plot points seemed conflicting, though. The ex-girlfriend wanted Hunter to stop surfing and settle down with her and that's basically why their relationship fell apart (aside from the fact that he didn't love her enough). When she reappears and all is said and done, her motivation for her behavior towards Gabby was that she knew Hunter could be great in the surfing arena and she wanted nothing but to see him succeed. That's kind of selfish and the polar opposite of what she was shooting for when she was with him. I didn't buy that at all.

I thought the plot point with old man Corsier was also odd. The son encourages Gabby to go for the job not knowing how his dad would feel about a female in that position and then the old man making all those derogatory comments. It seemed really off.

It bothered me how Hunter and Casey talked about their brother, Brody, and his time in prison. They love him, etc., but it almost seems like they never visited him while he was doing time. It seemed like they hadn't seen him in five years and he was a complete stranger, etc. I think it was supposed to make Brody seem mysterious.

I will read Brody's story. I'm also interested in Savannah's story. I wasn't very enthralled with Casey, though. Maybe something will happen in Brody's story that will make me like her more.