Screwed (As in, this book is) 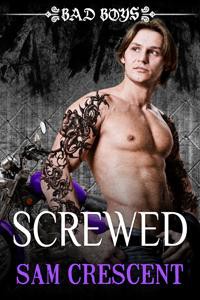 Had I purchased this through Amazon, I wouldn't have read beyond the 5% mark and I would've returned it for a refund.

The hero, Jesse, starts out telling some woman he just had sex with "You're a fucking whore and you're only good for one thing - on your back with your legs spread."  So, he starts off a douchy asshole, but at least he's something.  He then turns in to a cardboard cut out.  Just like the rest of the characters.  The dialogue was stilted, predictable and sometimes did not make sense.  It could've benefited from some additional proof-reading as there were a number of words missing from sentences.  Just... not good.  Also, it's something like 90 pages (maybe even half that - 20K words) with a $2.99 price tag, so over priced.